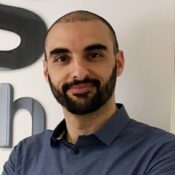 Oscar Expósito is a biologist with a pHD in Plant Biotechnology, for the Faculty of Pharmacy of the University of Barcelona. There he met his colleague Albert Jané, and together they created the Spin-Off Vytrus Biotech in 2009, specialized in the development, production and commercialization of high added value active ingredients from plant stem cells.

CSO, CEO and Co-Founder of Vytrus, Oscar is author of more than 12 scientific articles and 5 patents in the pharmaceutical and cosmetic sectors, he has participated as speaker in more than 30 national and international conferences, has been a professor in 7 masters and specialization courses, in entrepreneurship and biotechnology, and he is a member of several prestigious associations such as SEQC, SCS or IFSCC. With Vytrus he has won several international awards, such as the GOLD Innovation Award and the GOLD Green Award during In-Cosmetics 2019, and the Cosmetorium Award 2018.